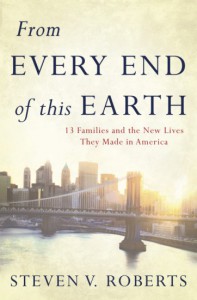 with Diane Rehm and Steve Roberts

Steve Roberts has been interested in the immigrant experience his whole life. His grandparents were Eastern European Jews who settled in Bayonne, N.J. (although one grandfather took a detour as a Zionist pioneer in Israel and then lived briefly in Washington near Sixth & I), and he grew up hearing their tales of the Old Country.

In From Every End of this Earth, Roberts chronicles the lives of 13 immigrant families who are living the journey today that his grandparents made almost 100 years ago. He captures the difficulties of starting over among strangers and the pursuit of hope within the American dream. Roberts will speak with NPR’s Diane Rehm about his book and the ongoing debate on immigration reform.