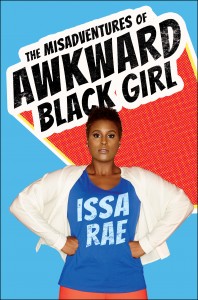 In Conversation with Dr. Kumea Shorter-Gooden

YouTube sensation Issa Rae has attracted over 20 million views and won the Shorty Award for Best Web Show for her hit series “The Misadventures of Awkward Black Girl.” Now, her debut essay collection of the same name explores what it is like to be awkward in a world that equates black with cool. Rae’s razor-sharp observations and no-holds-barred honesty speaks to anyone who has ever felt they were on the outside looking in.

Rae’s struggles to make sense of the world — and her place in it — led to the epiphany that inspired her first episode of Misadventures of Awkward Black Girl: “It all made sense: my shyness, all the times I was dismissed for not being “black enough,” my desire to reframe the images of black film and television […] these were all symptoms of my Awkward Blackness. This is an identity, I thought.” She had found her voice.

With her comical take on everything from evil co-workers, to connecting with other blacks (“The gamut of blackness is so wide.”), to public displays of affection and weight loss, Rae—named one of Forbes’s “30 Under 30”—isn’t just an awkward black woman: she’s every woman.

In conversation with Dr. Kumea Shorter-Gooden, the first Chief Diversity Officer Associate & Vice President at the University of Maryland-College Park, and the co-author of Shifting: The Double Lives of Black Women in America.  Book signing to follow.