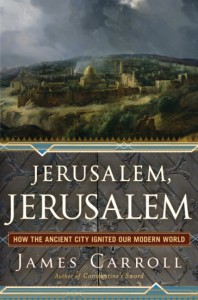 Jerusalem, Jerusalem: How the Ancient City Ignited Our Modern World uncovers how Jerusalem became, unlike any other city in the world, an incendiary fantasy of a city. Central to the religious imagination, it has been the holy of holies, but it has also been a cockpit of violence.

Tracing Jewish, Christian, and Muslim history, Carroll illuminates the mounting European fixation on Jerusalem as spark of both anti-Semitism and racist colonial contempt. Each religion is tempted to violence, and each finds ways to resist violence. Such deep history has relevance for the Israeli-Palestinian conflict today. No accident that this conflict is centered on Jerusalem—which is both the problem and the solution.