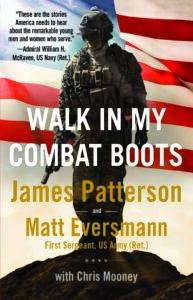 Walk in My Combat Boots: True Stories from America’s Bravest Warriors is a powerful collection of never-before-told war stories crafted from hundreds of original interviews with soldiers, sailors, airmen, and Marines by Patterson, the world’s bestselling author, and First Sergeant U.S. Army (Ret.) Matt Eversmann, part of the Ranger unit involved in the infamous Battle of Mogadishu portrayed in the movie Black Hawk Down.

Told in the voices of the men and women who’ve fought overseas from Vietnam to Iraq and Afghanistan, these brutally honest stories—usually only shared amongst comrades in arms—offer a rare, eye-opening look into what wearing the uniform, fighting in combat, losing friends, and coming home is really like.

Patterson has produced more enduring fictional heroes than any other novelist alive, like the character Alex Cross. A recipient of The National Book Foundation’s Literarian Award for Outstanding Service to the American Literary Community, he’s given over three million books to schoolkids and the military and donated more than seventy million dollars to support education.

Patterson will be in conversation with Admiral (Ret.) William H. McRaven and First Sergeant (Ret.) Eversmann. McRaven served for thirty-seven years as a Navy SEAL and, as a Four-Star Admiral, his final assignment was as Commander of all U.S. Special Operations Forces. He is the author of the #1 New York Times bestseller Make Your Bed and, coming in April 2021, The Hero Code: Lessons Learned from Lives Well Lived. Eversmann retired from the Army after twenty years of service. His last assignment was as an Infantry Company First Sergeant in the 10th Mountain Division during the surge in Iraq.