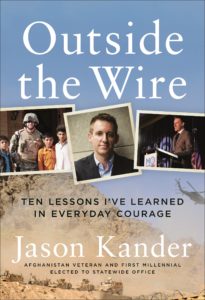 In Conversation with Symone Sanders

President Barack Obama has called Jason Kander the future of the Democratic Party. A former army captain and Afghanistan veteran, Kander was the first millennial ever elected to statewide office. Today, he is the founder and president of Let America Vote—dedicated to fighting back against voter suppression across the country—host of the “Majority 54” podcast, and a candidate for Mayor of Kansas City.

In Outside the Wire: Ten Lessons I’ve Learned in Everyday Courage, Kander retraces his journey from Midwestern kid to joining the military following 9/11 and launching his first political campaign, detailing with humor and intimacy the lessons he’s learned along the way.

Going “outside the wire,” military lingo for leaving the safety of a base, has taught Kander to take risks and make change rather than settling for the easy option. He understands that showing political courage really just means doing the right thing no matter what. From lessons imparted by his dad on the baseball diamond to wisdom gained in Kabul and cautionary tales witnessed under the Missouri Capitol dome, Kander offers a practical guide for anyone thinking about public service and everyone wishing to make a difference. Outside the Wire is a call to action, a meditation on the demands and rewards of civic engagement and, ultimately, a hopeful vision for America’s future.