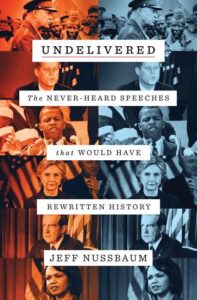 In Conversation with Jonathan Karl

Due to unforeseen circumstances, this event has been canceled for Tuesday, May 10. We are looking to reschedule this event for another date. All ticket buyers will be contacted with additional information. We sincerely apologize for any inconvenience.

For almost every delivered speech, there exists an undelivered opposite. These “second speeches” provide alternative histories of what could have been if not for schedule changes, changes of heart, or momentous turns of events.

In Undelivered: The Never-Heard Speeches that Would Have Rewritten History, Jeff Nussbaum—who most recently served as a special assistant and senior speechwriter to President Biden—presents the most notable speeches that were never delivered, from Dwight Eisenhower’s apology for a D-Day failure to Richard Nixon’s refusal to resign the presidency, and even Hillary Clinton’s acceptance for a 2016 victory—the latter never seen until now.

Examining the content of these speeches and the context of the historic moments that almost came to be, Nussbaum considers not only what they tell us about the past but also what they can inform about our present.

Prior to his role at the White House, Nussbaum was a partner at West Wing Writers, the premier strategy and speechwriting shop in DC. He will be in conversation with Jonathan Karl, ABC News Chief Washington Correspondent and New York Times bestselling author of Betrayal: The Final Act of the Trump Show.