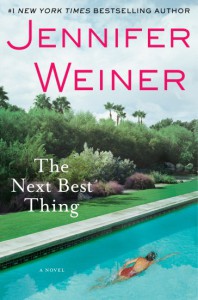 Set against the backdrop of LA’s television culture, The Next Best Thing is a moving story about what it’s like for a young woman to survive loss—and find love—in modern-day Los Angeles.

In The Next Best Thing, 28-year old Ruth Saunders finds herself among countless other young writers who have set their sights on the glittering world of Hollywood, where she and her grandmother travel to make Ruth’s dreams come true in. But not all that glitters is gold.

Ruth dreams of creating a sitcom called “The Next Best Thing,” based on her LA adventures with her grandmother. But nothing is ever easy in Hollywood, with difficult actors and number-crunching executives.

Jennifer Weiner is the #1 New York Times bestselling author of several novels including Good in Bed and In Her Shoes,a major motion picture starring Cameron Diaz, Toni Collette and Shirley MacLaine. She was recently voted #14 on Time magazine’s list of “140 Best Twitter Feeds.”