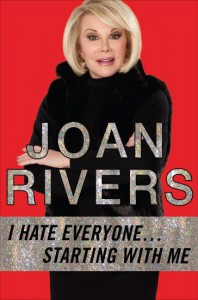 Her one-of-a-kind brand of irreverent, unconventional comedy fills the pages of her new book, I Hate Everyone…Starting with Me. Nothing is off-limits as Joan weighs in on the things (and people) she hates: vegans, gay weddings, old flight attendants, Boy Scouts, the Octomom, Arizona, rain forests, subways, and plucky old people, to name just a few.

Rivers will be interviewed by Joel Stein, TIME columnist and author of Man Made: A Stupid Quest for Masculinity.