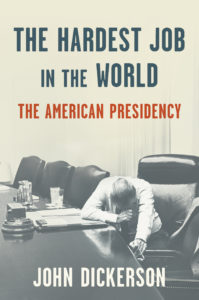 In Conversation with Susan Page

Imagine you have just been elected president. You are now commander-in-chief, chief executive, chief diplomat, chief legislator, chief of party, chief voice of the people, first responder, and world leader. You’re expected to fulfill your campaign promises, but you’re also expected to solve the surprising and urgent crises of the day. What’s on your to-do list? Where would you even start?

In The Hardest Job in the World: The American Presidency, Dickerson asserts that the American presidency is in trouble, illustrating how it has become overburdened, misunderstood, and almost impossible to do. Drawing on historical research and interviews with current and former White House staffers, he writes about presidents in history such as Washington, Lincoln, FDR, and Eisenhower, and in contemporary times, from LBJ and Reagan to Bush, Obama, and Trump, to show how a complex job has been done, and why we need to reevaluate how we view the presidency, how we choose our presidents, and what we expect from them once they are in office.

Dickerson is a “60 Minutes” correspondent. Prior to that, he was a co-host of “CBS This Morning,” the anchor of “Face the Nation,” and CBS News’s chief Washington correspondent. He is also co-host of Slate‘s “Political Gabfest” podcast and host of the “Whistlestop” podcast. The 2020 presidential campaign will be the seventh he has covered. In conversation with Susan Page, the Washington Bureau chief of USA TODAY and the author of The Matriarch.