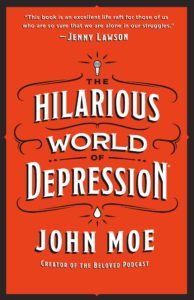 With Sean Doolittle and Linda Holmes

Timed with Mental Health Awareness month, John Moe—host of  “The Hilarious World of Depression” podcast—will speak about his new book of the same name chronicling his journey with depression, followed by conversations with Sean Doolittle, pitcher for the 2019 World Series winning Washington Nationals, and Linda Holmes, host of NPR’s “Pop Culture Happy Hour,” and then the guests will answer questions from the audience.

Depression is an incredibly common and isolating disease experienced by millions, yet often stigmatized by society. For years, Moe, a critically-acclaimed public radio personality, struggled with depression. It plagued his family and claimed the life of his brother. As he faced his own illness, he began to see similar behavior patterns and coping mechanisms in his conversations with others. Recognizing the tremendous comfort in talking about these experiences and the unique power of humor, he launched his acclaimed podcast.

The Hilarious World of Depression, a revealing memoir of Moe’s own journey, also shares funny stories and insights from his interviews with comics, musicians, and writers who have dealt with depression, from Andy Richter and John Green to Maria Bamford and Peter Sagal.

Throughout, Moe brings depression’s universal themes to light, including struggles with identity, lack of understanding of the symptoms, the challenges of work-life, self-medicating, the fallout of the disease in the lives of loved ones, the tragedy of suicide, and the hereditary aspects of the disease.