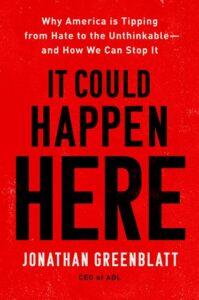 As CEO of the Anti-Defamation League (ADL), Jonathan Greenblatt has made it his mission to demonstrate how antisemitism, racism, and other insidious forms of intolerance can destroy a society, taking root as quiet prejudices but mutating over time into horrific acts of brutality.

In It Could Happen Here: Why America Is Tipping from Hate to the Unthinkable―And How We Can Stop It, Greenblatt sounds an alarm, warning that this age-old trend is gathering momentum in the U.S., as we recently saw in Colleyville, Texas—and that violence on an even larger, more catastrophic scale could be just around the corner if we don’t act now.

But it doesn’t have to be this way. Drawing on ADL’s experience in fighting hate through investigative research, education programs, and legislative victories as well as his own personal insights, Greenblatt offers a primer on how we—as individuals, organizations, and as a society—can strike back against hate and uphold principles of tolerance, civility, and inclusion in the face of rising bigotry.

Greenblatt will be in conversation with Jodi Rudoren, the editor-in-chief of the Forward, the nation’s oldest independent Jewish news organization. She spent more than two decades at The New York Times, where she served as Jerusalem bureau chief from 2012 through 2015.