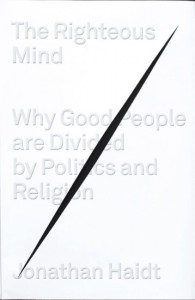 The Righteous Mind: Why Good People are Divided by Politics and Religion is an investigation into the origins of morality, which turns out to be the basis for religion and politics. The book is timely, explaining the American culture wars and refuting the “New Atheists,” as well as scholarly with its integration of insights from many fields.

Haidt argues that humans are descended from groups that outcompeted other groups, as well as from individuals who outcompeted their peers. We therefore have a dual nature: we are selfish as well as “hivish.” We love to lose ourselves in larger collective projects (hives), such as sports teams, political movements, and religious congregations.

Haidt is a professor in the Dept. of Psychology at UVA. He is the author of The Happiness Hypothesis and has presented at TED.