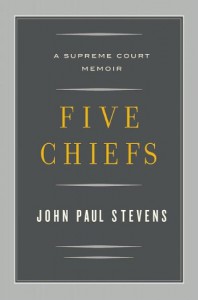 When he resigned last June, Justice Stevens was the third longest serving Justice in American history (1975 – 2010); only Justice William O. Douglas, whom Stevens succeeded, and Stephen Field have served on the Supreme Court for a longer time. In Five Chiefs: A Supreme Court Memoir, Justice Stevens captures the inner workings of the Court through his personal experiences with the five Chief Justices: Fred Vinson, Earl Warren, Warren Burger, William Rehnquist, and John Roberts.

He reminisces of being a law clerk during Vinson’s tenure; a practicing lawyer for Warren; a circuit judge and junior justice for Burger; a contemporary colleague of Rehnquist; and a colleague of current Chief Justice John Roberts. He shares his views of some of the most significant cases that have been decided by the Court.

Justice Stevens will be interviewed by Judge David Tatel of the United States Court of Appeals for the District of Columbia.