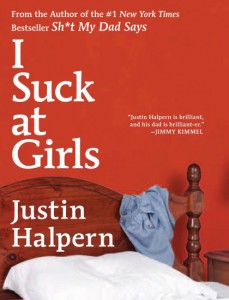 In the summer of 2009, Justin Halpern created a Twitter account as a way to archive his father’s no-holds-barred, expletive-ridden words of wisdom. Within a month, @shitmydadsays became an Internet sensation. Justin then wrote a book of the same name, which became a #1 New York Times bestseller.

His second book, I Suck at Girls, is a funny and touching collection of personal stories about relationships with the opposite sex, from a first kiss to getting engaged and all the awkward moments in between.

The story begins when Justin tells his dad that he’s decided to propose to his girlfriend. He gives Justin some advice: think back over everything he’s learned in life about women, relationships, and himself before making his decision. And that’s just what Justin does.

Full of his dad’s patented brand of wisdom, I Suck at Girls journeys into the best and worst moments of one man’s adventures in romance.

Deadspin writer Drew Magary will get the crowd warmed-up for Justin’s commentary on matters of the heart.