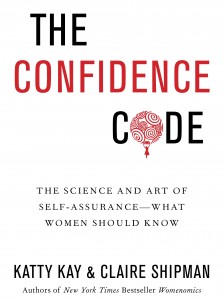 The Atlantic’s editorial features will once again be coming to life — this time examining “The Confidence Gap,” the magazine’s May cover story from broadcast journalists Claire Shipman and Katty Kay, based on their new book, The Confidence Code: The Science and Art of Self-Assurance—What Women Should Know, which argues that women still lag behind in terms of both earnings and workplace leadership because they are less confident than men.

Shipman, an ABC News reporter, and Kay, the anchor of BBC World News America, began collaborating together with their 2009 book Womenomics, which investigated issues of women’s shifting work-life balance. Now, in this new project, Shipman and Kay ask an important question: if women are successful students and competent employees, why do they consistently fall behind in climbing the professional ladder?

In a conversation with Atlantic Editor-in-Chief James Bennet, Kay and Shipman defend their provocative thesis that women continue to trail men in earnings and professional equity because they lack commensurate self-assurance.