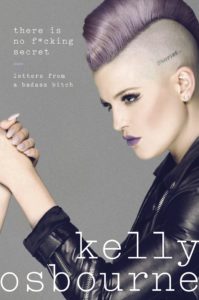 In Conversation with Kelly Cutrone

Osbourne has lived her entire life in the spotlight. As the daughter of one of the world’s best-known rock stars, she grew up completely exposed to the heavy metal scene and appeared alongside her family in the reality series The Osbournes, the highest rated show in MTV history. Kelly then went on to become a television personality, host, fashion designer, singer and actress. From drama, controversy and pain, Kelly has emerged as a confident and idiosyncratic person, sure of who she is and loving the life she leads.

In There is No F*cking Secret: Letters from a Badass Bitch, Kelly shares stories from her unconventional and highly speculated about life—from her famed Mum and Dad, to her Fashion Police co-host and beloved friend Joan Rivers, to bullying, addiction, rehab, social media, dating, and growing up.

Kelly hopes readers will come away feeling empowered to forge their own path to confidence and to embrace all the weird and wonderful things that make them unique.

A former co-host of E!’s Fashion Police with Joan Rivers, Kelly has also appeared on Dancing with the Stars and as a judge on Australia’s Got Talent and Project Runway: Junior. She co-created a collection of M*A*C cosmetics with her mother and has also designed Stories…By Kelly Osbourne, a ready-to-wear fashion line. Kelly has lent her voice to the Disney XD animated series The 7D as villain Hildy Gloom.

In conversation with Kelly Cutrone, the Founder and CEO of People’s Revolution, television personality, and New York Times bestselling author of If You Have to Cry Go Outside and Normal Gets You Nowhere. Most importantly she worships and lives for Kelly O! Book signing to follow.