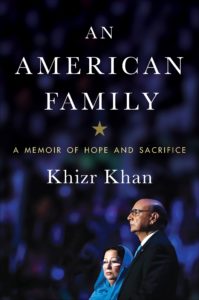 In Conversation with Wajahat Ali

One minute after Gold Star parent Khizr Khan concluded his speech at the 2016 Democratic Convention, Google searches for “register to vote” spiked and pocket Constitutions soared to the top of bestseller lists. Since the convention, Khan and his wife Ghazala have become national symbols of patriotism, celebrating equal protection and dignity for all Americans.

An American Family is a personal narrative about the nature of true patriotism. As Khan traces his journey, from humble beginnings in Pakistan to obtaining a degree from Harvard Law School and raising three sons in Silver Spring, Maryland, he shows what it means to leave the limitations of one’s country behind for the values and promises of another. He also tells the story of his middle son, U.S. Army Captain Humayun Khan, who was killed in 2004 while protecting his base camp in Iraq. He shares the ways in which he and his wife’s pride in their son and his sacrifice have helped them endure the deepest despair a parent can know.

Touching on immigration, anti-Islamophobia, veterans’ rights, patriotism and the meaning of democracy, An American Family provides a stark description of what an American looks like. Khan reminds us what being a nation of immigrants really means, and what it is to truly live our ideals.

In conversation with Wajahat Ali, a journalist, writer, lawyer, award-winning playwright, TV host, and consultant for the U.S. State Department. His writing has appeared in The New York Times, The Atlantic, The Washington Post, The Guardian, and Salon. Book signing to follow.