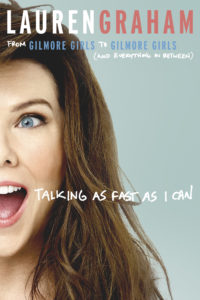 The Nation’s Capital will exude the charm of Stars Hollow when Graham, the star of Gilmore Girls and Parenthood, stops by to share her first work of nonfiction, Talking As Fast As I Can.

In this collection of personal essays, Graham – who grew up in Northern VA – reveals stories about life, love, and working as a woman in Hollywood, along with behind-the-scenes dispatches from the set of the new Gilmore Girls: A Year in the Life (which debuts on Netflix on November 25), where she plays the fast-talking Lorelai Gilmore once again.

In Talking as Fast as I Can, Graham hits pause for a moment and looks back on her life, sharing hilarious stories about growing up, starting out as an actress, and, years later, sitting in her trailer on the Parenthood set and asking herself, “Did you, um, make it?” She opens up about the challenges of being single in Hollywood and her experience being a judge on Project Runway.

Including photos and excerpts from the diary Graham kept during the filming of Gilmore Girls: A Year in the Life, this book is like a cozy night in, catching up with your best friend, laughing and swapping stories, and—of course—talking as fast as you can. In conversation with Linda Holmes, who writes and edits NPR’s entertainment and pop-culture blog, Monkey See, and hosts the NPR podcast Pop Culture Happy Hour.