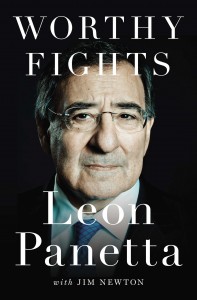 In Conversation with Mike Allen

Leon Panetta’s first career as a public servant began as an army intelligence officer and included a 35-year run in Congress, culminating in his role as Clinton’s budget czar and White House chief of staff. He then “retired” to establish the Panetta Institute, to serve on the Iraq Study Group, and to protect his beloved California coastline.

But in 2009, he returned to public office as the director of the CIA, and after leading the intelligence war that led to the killing of Osama bin Laden, Panetta became the U.S. secretary of defense and inherited two troubled wars in a time of austerity and painful choices.

Like his career, Worthy Fights: A Memoir of Leadership in War and Peace is a reflection of Panetta’s values. It is imbued with the frank, grounded, and quite funny spirit of a man who never lost touch with where he came from: his family’s walnut farm in Carmel Valley. It is also a testament to the kind of political leadership that favors progress and duty to country over partisanship. In conversation with Mike Allen, the chief White House correspondent for Politico.