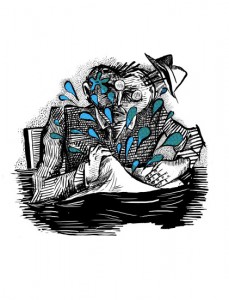 Exhibit will be on display through March 2nd.

The exhibit showcases pieces from Liana Finck’s upcoming graphic novel based on The Jewish Daily Forward’s “Bintel Brief” advice column. Through the column, young immigrants sought advice on a variety of heartbreaking and absurd dilemmas. Finck’s illustrations capture these letters as seen from the point of view of a narrator – an omniscient but relatively helpless columnist inspired by the Forward’s founding editor, Abraham Cahan.

Finck graduated from Cooper Union and received a Fulbright Fellowship to Brussels to write a graphic novel about Georges Remi, the creator of the beloved comic book character Tintin. She is a recipient of the prestigious Six Points Fellowship, a two-year grant for emerging Jewish artists.

Finck and this exhibit are supported by a grant from the Six Points Fellowship for Emerging Jewish Artists, a partnership of Avoda Arts, JDub, and the Foundation for Jewish Culture, and made possible with major funding from UJA-Federation of New York. This exhibit is also supported by The Jewish Daily Forward where Finck’s comics will be serialized in 2012.

Exhibit opening will feature appearances by the artist as well as representatives from The Forward.Food and drink will be served.