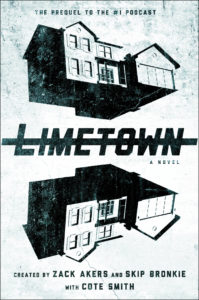 Due to unforeseen circumstances, this program has been canceled. All ticket buyers have been contacted and refunded.

Almost immediately after Zack Akers and Skip Bronkie launched “Limetown” in 2015, the podcast hit #1 on iTunes, topping “This American Life” and “Serial.” Inspired by historic radio dramas, stories of vanishing civilizations, and fictional oral histories, “Limetown” has amassed a rabid following of over 10 million listeners to date.

The premise: On a seemingly ordinary day, three hundred men, women, and children living at a research facility in Limetown, Tennessee, disappeared without a trace. The story unfolds as journalist Lia Haddock investigates the mystery of the missing Limetown residents, including her long-lost uncle, Emile.

Limetown: The Prequel to the #1 Podcast goes back in time to tell the stories of both Lia’s adolescence and her Uncle Emile’s—and how his strange psychological condition entangled their family in mysterious and dangerous research. This original prequel, told in novel form, takes readers back to the beginning and opens a new dimension of the “Limetown” universe, sharing a deeper layer of the story for existing fans.

Akers and Bronkie are co-creators of the Two-Up podcast channel. Previously, Akers was a documentary producer with Flagstaff films, and Bronkie was a creative director for Facebook and Pinterest. Cote Smith is the author of the novel Hurt People, and his stories have been featured in One Story, Crazy Horse, and Third Coast. Book signing to follow.