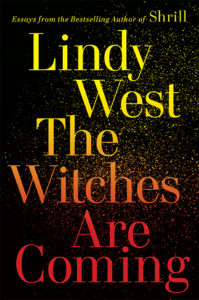 From the moment powerful men started to be brought down by the #MeToo movement, the lamentations began: this is feminism gone too far, this is injustice, this is a witch hunt. Lindy West, the firebrand New York Times columnist and bestselling author of Shrill—now a critically acclaimed Hulu TV series—turns that refrain on its head in The Witches Are Coming.

The incisive cultural critique explains how patriarchy, intolerance, and misogyny are still alive and well, woven into America’s DNA. West urges readers to reckon with dark lies in the heart of the American mythos, and unpacks the complicated politics of not being a white man in the 21st century. The book explores how we got to this precarious, disorienting moment in history through a long lens of pop culture, dissecting the stories we’ve been telling about ourselves (and each other) for generations, the assumptions we swallow as fact, and the facts we deny. The Witches Are Coming also examines what comes next, as cultural reckonings like #MeToo grow in power and scope.

West’s essays on feminism, social justice, body image, and popular culture have been featured in Jezebel, Cosmopolitan, GQ, on This American Life, and more.

The format for this event will be a 20-minute talk+reading by the author, followed by 40 minutes of audience questions, with a book signing to follow.