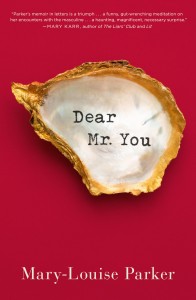 In Conversation with David Plotz

Dear Mr. You renders the singular arc of a woman’s life through letters Parker composes to the men, real and hypothetical, who have informed the person she is today. The literary debut from the Tony, Emmy, and Golden Globe award-winning actress and star of Weeds, Angels in America, and Showtime’s forthcoming series Lit is as unconventional in its form as in its telling.

Parker writes to a coworker in a loincloth at her co-op; to a taxi driver she screamed at during a dark period; to the orderly assigned to her after the birth of her son; to the grandfather she never knew; to the uncle of the infant daughter she adopted, and the future man who will love that daughter. Her letters reveal the complexity and power to be found in relationships both loving and fraught.

Parker’s writing has appeared in Esquire, The Riveter, Bust, and The Bullet. In conversation with David Plotz. CEO of Atlas Obscura and former Editor of Slate. Book signing to follow.