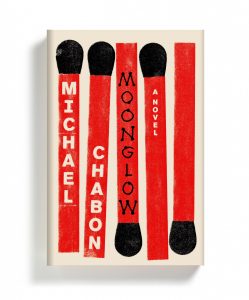 In his new novel, Moonglow, Chabon explores truth and lies, family legends, and existential adventure. Unfolding as a deathbed confession from grandfather to grandson, it is a tale of madness and model rocketry, of war and adventure, of love and desire, of the shining aspirations and demonic underpinnings of American technological accomplishment at mid-century and, above all, of the destructive impact—and the creative power—of the keeping of secrets and the telling of lies.

Moving from the Jewish slums of pre-war South Philadelphia to the invasion of Germany, from a Florida retirement village to New York’s Wallkill Prison, from the heyday of the space program to the twilight of “the American Century,” Moonglow collapses an era into a single life and a lifetime into a single week.

In 1989, tongue loosened by powerful painkillers and memory stirred by the imminence of death, Chabon’s own grandfather told him stories he had never heard before, revealing pieces of a history long buried and forgotten.

Chabon has transformed the experience he had listening to his own grandfather into a speculative history that attempts to reconstruct the mysterious origins and fate of Chabon Scientific, Co., an authentic mail-order novelty company whose ads for scale models of human skeletons, combustion engines and space rockets were once a fixture in the back pages of Esquire and Popular Mechanics. The result is a gripping and wholly imaginary transcript of a life that spans the dark heart of the twentieth century.

Chabon is the bestselling and Pulitzer Prize-winning author of The Mysteries of Pittsburgh, A Model World, Wonder Boys, Werewolves in their Youth, The Amazing Adventures of Kavalier & Clay, Summerland, The Final Solution, The Yiddish Policemen’s Union, Maps & Legends, Gentlemen of the Road, Telegraph Avenue, and the picture book The Astonishing Secret of Awesome Man. Book signing to follow.