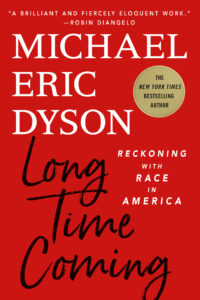 In Conversation with Donna Brazile

The night of May 25, 2020, changed America. George Floyd, a 46-year-old black man, was killed by a white police officer during an arrest in Minneapolis, sparking the largest protests in our country’s history and the sort of social unrest we have not seen since the sixties. While Floyd’s death was the catalyst—and heightened by the fact that it occurred during a pandemic whose victims are disproportionately of color—it was in truth the fuse that lit a powder keg that has been filling since America’s promising but perilous beginning, says Dr. Michael Eric Dyson.

In his new book, Long Time Coming: Reckoning with Race in America, Dyson examines the cultural imperatives of black death, the plague of police brutality, the white theft of black bodies and opportunities, the craving for white comfort that has too often cost black people their lives, and more. Ending with a poignant plea for hope, Long Time Coming is a guide to help America finally reckon with race, pointing the way to social redemption.

Dyson is a professor of African American and Diaspora Studies and of Ethics and Society at Vanderbilt University. The author of seven New York Times bestsellers, he is also a contributing opinion writer for the New York Times. Dyson is a recipient of two NAACP Image awards and the 2020 Langston Hughes Festival Medallion. In conversation with Donna Brazile, a veteran political strategist, adjunct professor, and bestselling author. Brazile twice served as the Chair of the Democratic National Committee and is currently a FOX News contributor.