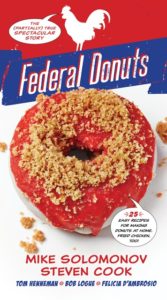 With a wad of cash in hand and a dream, Mike Solomonov and Steven Cook—two-time James Beard Award winners for Zahav: A World of Israeli Cooking—meet a Craigslist stranger in a parking lot and buy a used “donut robot.” It would do all the rest, right? Partially raw donuts, plenty of regrets, and long lines ensue, but soon the partners work out the kinks and develop an exquisite dough delicately spiced with Middle Eastern aromatics.

Federal Donuts: The (Partially) True Spectacular Story chronicles the quirky story of how a harebrained idea resulted in a mini empire and turned Philadelphia into a donut destination. Strawberry lavender, guava poppy, pomegranate Nutella, and salted tehina are just a few of the imaginative flavors featured in the book, along with the tips needed for making foolproof donuts at home.

Celebrate Chanukah over donuts and a wide-ranging conversation hosted by Jeffrey Goldberg, the Editor in Chief of The Atlantic, exploring Solomonov and Cook’s journey in the food business, their Jewish identities and relationships with Israel, and together creating a realized life’s mission while overcoming personal struggles.

Cook, the son of a rabbi, is a graduate of the Wharton School of Business and the French Culinary Institute. He left a job as an investment banker in New York to pursue a career as a restaurateur. Book signing to follow.

In partnership with OneTable.