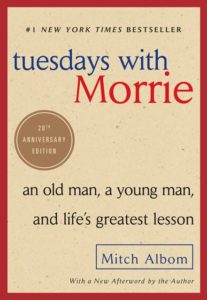 In 1995, Mitch Albom watched Ted Koppel’s interview with Morris “Morrie” Schwartz, Albom’s favorite college professor, on Nightline. Morrie had been diagnosed with ALS and was spending his final months talking with others about what it meant to be dying. Moved by the interview, and feeling guilty that he had lost touch with Schwartz, Albom went to visit him. That turned into another visit, and another, and every Tuesday that remained in Morrie’s life. Their wise conversations became the basis for Tuesdays with Morrie: An Old Man, a Young Man, and Life’s Greatest Lesson.

Albom wrote the book only to help pay for Morrie’s medical bills. Its message of inspiration resounded with readers, and the book became a #1 New York Times bestseller.

On the occasion of the 20th anniversary of the book’s initial release, a new edition commemorating the milestone is being published. It includes a new afterword from Albom, reflecting back on his relationship with Morrie and the incredible impact the book has had since its publication.

Albom is the author of six consecutive #1 New York Times bestsellers and his books have collectively sold more than 35 million copies in 45 languages. He is also a screenwriter, playwright, nationally syndicated columnist, broadcaster, and musician. Albom has founded eight charities in Detroit and Haiti, where he operates an orphanage. In conversation with Ted Koppel, the long-time anchor of Nightline, a recipient of 42 Emmys, and the author of Lights Out. Book signing to follow.