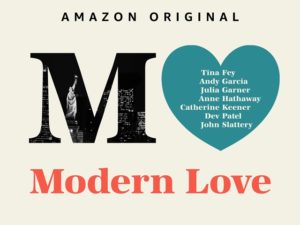 As editor of “Modern Love” at The New York Times, Daniel Jones has read tens of thousands of essays about the highs, lows, and woes of relationships while overseeing a column that has grown from print to podcast to, most recently, a television series starring Anne Hathaway, Tina Fey, Dev Patel, and more.

Daniel Jones will be joined by Deborah Copaken, whose “Modern Love” essay, “When Cupid is a Prying Journalist,” was adapted for the Amazon Original series. After a screening of Copaken’s episode, she and Jones will talk about love, loss, and what it’s like to have your life turned into television.

Following the event, Jones will sign copies of the newly updated anthology, Modern Love: True Stories of Love, Loss, and Redemption, including the most popular and unforgettable essays from the past fifteen years of the “Modern Love” column.