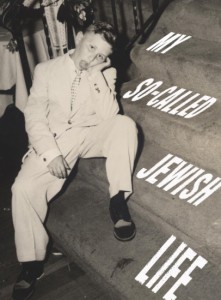 Sixth & I and SpeakeasyDC present the second annual night of funny, poignant, and peculiar autobiographical stories about all things Jewish, not-so-Jewish, and wanna-be-Jewish. Storytellers include:

Danny Harris is the editor of People’s District, a website that tells a people’s history of D.C. using the words and portraits of its residents.

David Litt is a speechwriter in D.C. Most recently, he directed the District of Columbia’s field program for the Democratic National Committee.

Amy Saidman is SpeakeasyDC’s artistic executive director. She is a two-time recipient of the artist fellowship award from the DC Commission on the Arts and Humanities. Amy has survived Camp Moshava, High School in Israel, and Aish haTorah

Karen Sommer Shalett is the editor-in-chief of DC Magazine, a Washington-area lifestyle glossy covering the region’s top innovators and events.

Alix Spiegel began her career in radio as one of the founding producers of This American Life. She is currently a reporter on NPR’s Science Desk and covers psychological research and general human sadness.

Emily Yoffe writes Slate’s “Dear Prudence” and “Human Guinea Pig” columns. She is author of What the Dog Did: Tales From a Formerly Reluctant Dog Owner.