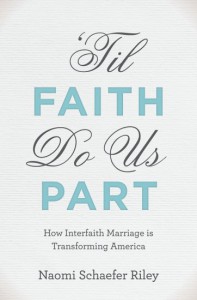 In the last decade, 45% of all marriages in the U.S. were between people of different faiths. The rapidly growing number of mixed-faith families is a sign of openness and tolerance among religious communities.

However, what is good for society as a whole often proves difficult for individual families. As Riley demonstrates in ‘Til Faith Do Us Part: How Interfaith Marriage Is Transforming America, interfaith couples are less happy than others and certain combinations of religions are more likely to lead to divorce.

Interviews with married and once-married couples, clergy, and sociologists reveal that many interfaith couples marry without much consideration of the fundamental spiritual and practical issues that divide them. Couples tend to marry in their twenties and thirties, when romantic ideals are high and as a result, deeply held religious differences are overlooked.

Those differences can pose a challenge when individuals return to their faith as they grow older, have children, and experience major life changes.