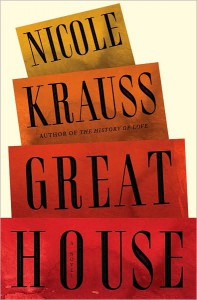 For twenty-five years, a reclusive American novelist has been writing at the desk she inherited from a young Chilean poet who disappeared at the hands of Pinochet’s secret police; one day a girl claiming to be the poet’s daughter arrives to take it away, sending the writer’s life reeling. Across the ocean in London, a man caring for his dying wife discovers a lock of hair that unravels a terrible secret. In Jerusalem, an antiques dealer reassembles his father’s study, plundered by the Nazis in Budapest in 1944.

Connecting these stories is a desk of many drawers that exerts a power over those who possess it or have given it away. As the narrators of Great House make their confessions, the desk takes on more and more meaning, and comes to stand for all that has been taken from them, and all that binds them to what has disappeared.

Nicole Krauss is the author of Man Walks into a Room and the international bestseller The History of Love. In 2010, The New Yorker named her one of the 20 best writers under 40. Krauss will be interviewed by Hanna Rosin, Founding Editor of DoubleXand Contributing Editor to the Atlantic.