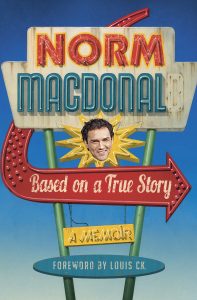 In Conversation with Geoff Edgers

In Based on a True Story, Norm Macdonald tells the story of his life—more or less—from his origins on a farm in the-back-of-beyond Canada to an epically disastrous appearance on Star Search, to his account of auditioning for Lorne Michaels and his memorable run as the anchor of Saturday Night Live’s Weekend Update—until he was fired because a corporate executive didn’t think he was funny. Much more than a memoir, Based on a True Story is the hilarious story of the actor, writer, producer, gambler, raconteur, and stand-up comedian’s life.

In dispatches from a road trip to Las Vegas (part of a plan hatched to regain the fortune he’d lost to sports betting and other vices), Macdonald recounts the milestone moments, the regrets, the love affairs, the times that fortune smiled on his life, and the times it refused to smile. As the clock ticks down, Macdonald’s debt reaches record heights, and he must find a way to evade the hefty price that’s been placed on his head by one of the most dangerous loan sharks in the country.

Macdonald peppers these pages with classic jokes and long mythologized Hollywood stories—with appearances from Chris Farley, Rodney Dangerfield, Sarah Silverman and Sam Kinison. Macdonald wrote for Roseanne, starred in The Norm Show, has appeared in numerous movies and TV shows, and has done voiceovers in many animated features and TV shows. In conversation with Geoff Edgers, National Arts Reporter for The Washington Post. Book signing to follow.