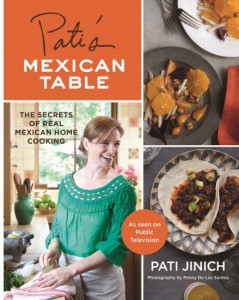 In Conversation with Joe Yonan

Born and raised in Mexico City, Pati Jinich is on a mission to show Americans that Mexican cooking isn’t what they’ve come to expect.

Pati didn’t set out to be a chef; it was only at the height of her career as a policy analyst that she realized food had always been her first love. She left her job to pursue her passion and went on to become the official chef of the Mexican Cultural Institute and star of her own PBS series.

Pati’s Mexican Table introduces readers to Mexican ingredients, cooking techniques, and recipes, many of which are surprising in their simplicity and freshness. Contrary to popular belief, they’re not always spicy, covered in cheese, or for carnivores alone.

In the book, she also tells stories about her homeland’s history and rich culture, while also sharing her upbringing, travels, and conversations with cooks across both her native and adopted countries.

In conversation with Joe Yonan, Food Editor of The Washington Post.