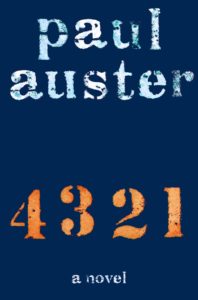 Nearly two weeks early, on March 3, 1947, in the maternity ward of Beth Israel Hospital in Newark, New Jersey, Archibald Isaac Ferguson, the one and only child of Rose and Stanley Ferguson, is born. From that single beginning, Ferguson’s life will take four simultaneous and independent fictional paths. Four identical Fergusons made of the same DNA, four boys who are the same boy, go on to lead four parallel and entirely different lives.

With a passion for realism and a great tenderness and fierce attachment to history, 4 3 2 1 is a sweeping and surprising story of birthright and possibility, of love and life itself.

Auster is the bestselling author of Winter Journal, Sunset Park, Invisible, The Book of Illusions, and The New York Trilogy, among many other works. He received  the Prince of Asturias Award for Literature and was inducted into the American Academy of Arts and Letters.