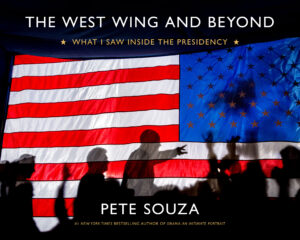 Unfortunately, Pete Souza is unable to appear at Sixth & I on October 2. All ticket buyers have been contacted and all tickets will be honored on the new date, Saturday, October 8 at 7:30 pm. With questions, contact [email protected].

Presidential photographer Pete Souza has spent more time in the Oval Office than almost any person in history. As the Chief Official White House Photographer for the entire tenure of Barack Obama’s presidency, Souza was inside the presidential bubble for more than 25,000 hours and made nearly 2 million photographs. In The West Wing and Beyond: What I Saw Inside the Presidency, Souza shares rarely seen photos and stories of life and work in the White House, the Situation Room, and more.

During this event, Souza will be projecting photographs and telling stories from the Obama years. You’ll go behind the scenes of consequential moments in the Oval Office, decisive meetings in the West Wing, and even some fun moments aboard Air Force One—all offering a fascinating look into the details that comprise the modern presidency.

Souza is the #1 New York Times bestselling author of Obama: An Intimate Portrait and Shade: A Tale of Two Presidents. A photojournalist since the late 1970s, Souza was also an official White House photographer during the Reagan administration and, in 2021, was inducted into the International Photography Hall of Fame.