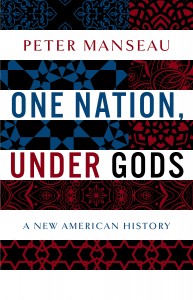 Every American high school student learns about the Puritans and their “city upon a hill,” an iconic metaphor for how our country was founded on distinctly Christian religious ideals. However, this understanding overlooks the complex spiritual history of the United States, from its very origins. One Nation, Under Gods: A New American History shows how the nation was shaped by multiple religious traditions, a rich interplay of beliefs making up the fabric of American life.

Manseau provides countless examples of how the country diverged from a standard, monotheistic Christian mantel. Covering five centuries of history, he reexamines familiar events through the lens of broader religious understanding. From Thomas Jefferson’s assertion that religion should be protected whether it be “twenty gods or no god,” a foundational argument for tolerance, to the complex social origins of the Salem witch trials, One Nation demonstrates again and again how our country was shaped by an incredibly wide spectrum of beliefs.

Manseau is himself a product of a diverse religious background: he’s the unlikely son of a priest and a nun, a Catholic writer who has won many book awards from the Jewish community. He holds a doctorate in religion from Georgetown University and is currently a fellow at the Smithsonian. He is the author of Rag and Bone, Songs for the Butcher’s Daughter, and Vows. Book signing to follow.