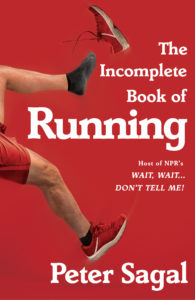 On the verge of turning forty, Peter Sagal—brainiac Harvard grad, short bald Jew with a disposition towards heft, and a sedentary star of public radio—started running seriously. Much to his surprise, he kept going, participating in fourteen marathons and logging tens of thousands of miles all over the country and beyond, running the equivalent of once around the earth.

In The Incomplete Book of Running, Sagal reflects on the trails, tracks, and routes he’s traveled, from  running charity races in his underwear to running as a guide alongside visually impaired runners, and running the Boston Marathon the year after the bombing. Sagal also writes about the emotional experience of running, body image, the similarities between endurance sports and sadomasochism, and the odd yet extraordinary bonds running creates between strangers and friends.

Sagal is the host of the Peabody Award-winning NPR news quiz “Wait Wait…Don’t Tell Me!,” the most popular show on public radio, heard by five million listeners each week. He is also the host of Constitution USA on PBS, a playwright and screenwriter, and a featured columnist in Runner’s World. In conversation with Linda Holmes, the host of NPR’s “Pop Culture Happy Hour.” Book signing to follow.