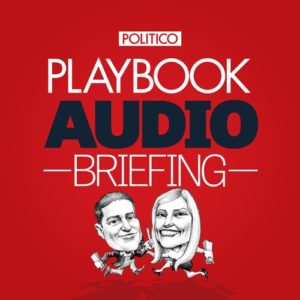 Anna Palmer and Jake Sherman are going LIVE with POLITICO Playbook in a special extended version of the Playbook Audio Briefing. Join the authors of the most influential newsletter in politics for a live taping of POLITICO Playbook, taking you behind the scenes on Capitol Hill, in the White House, and telling you everything that you need to know to make sense of Washington as we look toward mid-term elections in 2018.

Anna and Jake have transformed Playbook from a must-read daily newsletter into an entire experience that now includes a podcast, an afternoon briefing, and a growing events series that aims to connect Washington to state and global power centers. As Vanity Fair writes – they’re “POLITICO’s next generation…taking over Washington.”