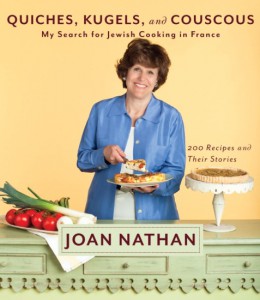 Quiches, Kugels, and Couscous: My Search for Jewish Cooking in France

Jewish cooking in France is as diverse as the French landscape. Beyond the copious falafels and the Eastern European pastries served on the Rue des Rosiers in Paris, dishes draw from a combination of influences: Ashkenazim, Sephardim, and the French regions where they evolved, on the continent or in the old colonial Empire. Joan Nathan is the author of ten cookbooks and an inductee into the James Beard Foundation’s Who’s Who in American Food and Beverage.

Followed by a book signing and reception with dishes made from recipes in the book.