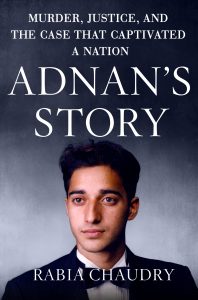 In Conversation with Wajahat Ali

Millions of Americans were captivated by the Peabody Award winning podcast Serial that focused on Adnan Syed’s trial and subsequent murder conviction for the death of his former girlfriend, Hae Min Lee. The reason Sarah Koenig decided to investigate Adnan’s case was due to one woman—Rabia Chaudry.

As a close family friend of Adnan’s, Chaudry has long believed in his innocence and has doggedly pursued every route toward exoneration. In Adnan’s Story: The Search for Truth and Justice after Serial, Chaudry takes readers back into Adnan’s case, exposing new evidence on the investigation and trial that she argues dismantles the State’s case against Adnan. Chaudry, an attorney, has covered the case from a legal perspective in her podcast Undisclosed.

In February 2016, a post-conviction hearing was held and the decision on whether Adnan will get a new trial is still pending. The book includes never-before-seen letters from Adnan in which he reflects on his life before, during, and after the trial.

Chaudry is a Jennings Randolph Senior Fellow at the US Institute of Peace and an International Security Fellow at New America. Her writing has appeared in numerous outlets including Time.com, the Huffington Post, and the Chicago Times. In conversation with Wajahat Ali, a journalist, writer, lawyer, TV host, and an award-winning playwright. Book signing to follow.