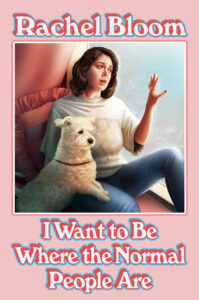 In Conversation with Yael Grobglas

Rachel Bloom—the comedian, actress, writer, singer, and star of “Crazy Ex-Girlfriend”—has felt abnormal and out of place her whole life. In I Want to be Where the Normal People Are, an exploration of what she thinks makes her “different,” she comes to realize that a lot of people also feel this way, even people who she otherwise considered “normal.”

The collection of hilarious personal essays, poems, and even amusement park maps center on insecurity, fame, anxiety, and more. Bloom writes about everything from weirdness and female friendships to OCD and depression and her love of Disney, among other infinitely relatable topics.

Bloom, the creator and co-executive producer of “Crazy Ex-Girlfriend,” earned both a Golden Globe and Critics Choice award for her performance in the show. She will be writing the music and lyrics for “The Nanny” on Broadway. In conversation with Yael Grobglas, an actress best known for her role as Petra Solano on “Jane the Virgin.”