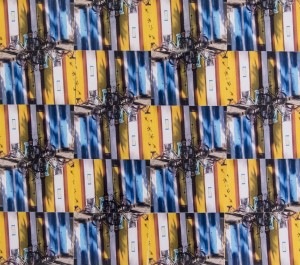 This exhibit from Esther Safran Foer, Executive Director of Sixth & I, showcases her photographs arranged on a grid to create patterns that convey the emotions associated with when and where the photos were taken. Esther is a collector of memories – small jars of rocks and sand from places that she has visited, and thousands of old and new photos. With a desire to curate her memories in an unexpected way, she sat down with photos and began to move them around, arranging them in different ways.

From her first assemblage inspired by photos from a moving visit to the shtetls of Ukraine, to trips of personal connection in Jersalem, Brazil and Maui, Reassembled Memory features Esther’s photos in ways that artistically convey her memories as they reemerge with a new spirit and soul.