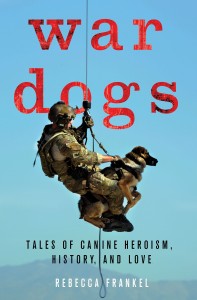 In Conversation with James Fallows

Courageous, devoted, and fiercely loyal, military dogs are truly man’s best friend on the battlefield. These faithful canine warriors have been active members of the U.S. military since 1942, and in recent years, they are the single greatest advantage that allied forces have against the signature weapon of the post-9/11 era – the IED.

War Dogs: Tales of Canine Heroism, History, and Love gets to the heart of the connections these dogs form with their human comrades, and how this symbiotic relationship has forever changed the way soldiers experience war.

Informed by Frankel’s own training with military dog teams and interviews with K-9 program managers, veterinary technicians stationed in Bagram, and the handlers who have deployed with dogs in wars from Vietnam to Afghanistan, War Dogs illuminates the natural abilities of these animals and the unbreakable bonds between handler and animal as they risk their lives side by side.

Frankel is senior editor, special projects at Foreign Policy Magazine. Her regular Friday column “Rebecca’s War Dog of the Week” has been featured on The Best Defense since January 2010. Her 2011 photo essay “War Dog,” has received upwards of 16 million views. In conversation with James Fallows, a national correspondent for The Atlantic. Book signing to follow.