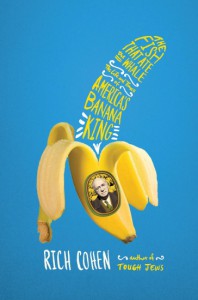 The Fish That Ate the Whale: The Life and Times of America’s Banana King is a true, historical profile of the banana king, Samuel Zemurray, a little known antihero and the son of a Jewish Russian farmer.

When Zemurray arrived in America in 1891, he was tall, gangly, and penniless. When he died 69 years later, he was among the richest, most powerful men in the world. In between, he worked as a fruit peddler, a banana hauler, a dockside hustler, and a plantation owner. He overthrew two governments in Central America, created the basic CIA template, and bested and took over United Fruit.

The capitalist revolutionary driven by an indomitable will to succeed lived one of the great untold stories of the last hundred years. You don’t know about him for the same reason people didn’t know about Don Corleone. Because he did not want you to.

Cohen is a contributing editor at Vanity Fair and Rolling Stone and the author of seven books, including Israel Is Real, Tough Jews, and Sweet and Low.