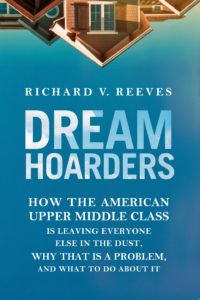 In Conversation with David Brooks

In America, the 1% are considered the villains while everyone else, the 99%, are the good guys. Not so, argues Brookings Institution senior fellow Richard Reeves in Dream Hoarders: How the American Upper Middle Class Is Leaving Everyone Else in the Dust, Why That Is a Problem, and What to Do About It. The real class divide is not between the upper class and the upper middle class: it is between the upper middle class and everyone else.

The dangerous separation of the upper middle class from everyone else is both economic and social, he writes, and the practice of “opportunity hoarding” is especially prevalent among parents who want to perpetuate privilege to the benefit of their children. While many believe this is just good parenting, it is actually hurting others by reducing their chances of securing these opportunities. Every college acceptance or internship that is offered based on a legacy or personal connection is one that is not available to others.

Immobility and inequality are felt by Americans at a personal and national level. The growth of populism in the U.S. and in the United Kingdom is arguably a direct result of middle and lower class citizens finding themselves without a chance to move up the ladder. The opportunity hoarding of the upper middle class, Reeves argues, may not be the cause of poverty, but is the cause of immobility. In Dream Hoarders, he says that changes in policy and social conscience are the only way to fix the broken system.

Reeves is the co-director of the Center on Children and Families at the Brookings Institution. His research focuses on social mobility, inequality, and family change. Formerly, he was the director of strategy to the UK’s Deputy Prime Minister. In conversation with David Brooks, an Op-Ed columnist for The New York Times and the author of Bobos in Paradise, On Paradise Drive, and The Social Animal. Book signing to follow.