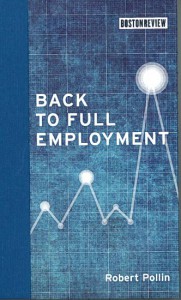 In Conversation with Harold Meyerson

Full employment used to be an explicit goal of economic policy in most of the industrialized world. In Back to Full Employment, economist Robert Pollin argues that the U.S.–today faced with its highest level of unemployment since the Great Depression–should put full employment back on the agenda.

Full employment will promote equality and social stability as well as help end our dependence on fossil fuels and build an economy powered by clean energy.

Explaining views on full employment in macroeconomic theory from Marx to Keynes to Friedman, Pollin argues that the policy was abandoned in the 1970s for the wrong reasons, and he shows how it can be achieved today despite the challenges of inflation and globalization.

Pollin is Professor of Economics and Co-director of the Political Economy Research Institute (PERI) at the University of Massachusetts, Amherst. He is the author of Contours of Descent: U.S. Economic Fractures and the Landscape of Global Austerity.

Pollin will be in conversation with Harold Meyerson, Editor-at-Large of The American Prospect.