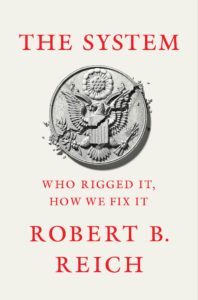 From the bestselling author of Saving Capitalism and The Common Good comes The System: Who Rigged It, How We Fix It, an urgent analysis of how the “rigged” systems of American politics and power operate, how this status quo came to be, and how average citizens can enact change.

Millions of Americans have lost confidence in our political and economic system. After years of stagnant wages, volatile job markets, and an unwillingness by those in power to deal with profound threats such as climate change, there is a mounting sense that the system is fixed, serving only those select few with enough money to secure a controlling stake.

In the book, the economist, former Secretary of Labor, and professor of public policy at University of California, Berkeley shows how wealth and power have interacted to install an elite oligarchy, eviscerate the middle class, and undermine democracy. Reich’s objective is not to foster cynicism, but rather to demystify the system so that we might instill fundamental change and demand that democracy works for the majority once again. Book signing to follow.