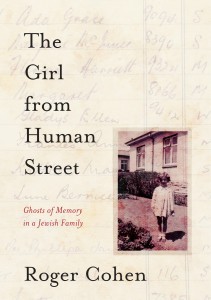 The award-winning New York Times columnist turns a compassionate yet discerning eye on his family’s legacy in The Girl from Human Street: Ghosts of Memory in a Jewish Family, an intimate memoir of modern Jewish identity, following the diaspora of his own family to examine the impact of memory, displacement, and disquiet.

Starting with his uncle’s experience in WWII Italy, Cohen weaves together family stories, memories, diaries, and letters stretching back to the 19th century. We relive the anomie of European Jews before and after the Holocaust, following them from Lithuania to South Africa, England, the U.S. and Israel. He illuminates the uneasy resonance of the racism his family witnessed living in apartheid-era South Africa and the ambivalence felt by his Israeli cousin when tasked with policing the occupied West Bank.

Through the decades, the Jewish sense of “otherness” is pervasive, and Cohen finds it has been a significant factor in his family’s history of manic depression. This is a story of remembrance and repression, suicide and resilience, moral ambivalence and uneasily evolving loyalties (religious, ethnic, national).