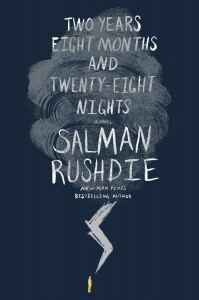 After writing his memoir and a children’s novel, Two Years Eight Months and Twenty-Eight Nights is Rushdie’s first adult novel in seven years.

The novel is a wonder tale about the way we live now, blending history, mythology, and a timeless love story to bring alive a world – our world – that has been plunged into an age of unreason. It is a time of enormous upheaval, where beliefs are challenged, words act like poison, silence is a disease, and a noise may contain a hidden curse. Inspired by 2,000 years of storytelling tradition yet rooted in the concerns of our present moment, it is an enduring testament to the power of the imagination.

Inspired by the traditional “wonder tales” of the East, Rushdie’s new novel is satirical and bawdy, full of cunning and folly, rivalries and betrayals, kismet and karma, rapture and redemption.

Rushdie is the author of twelve novels, one collection of short stories, and four works of nonfiction. He is a member of the American Academy of Arts and Letters and a Distinguished Writer in Residence at New York University. Rushdie was knighted in 2007 for services to literature. Book signing to follow.