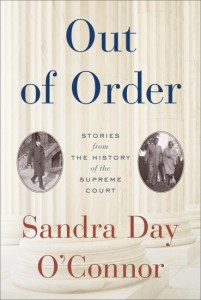 From the first woman to sit on the United States Supreme Court, Out of Order sheds light on the centuries of change and upheaval that transformed the Supreme Court from its uncertain beginnings into the institution that thrives today.

From the early days of circuit-riding to the changes in civil rights; from foundational decisions such as Marbury vs. Madison to modern-day cases such as Hamdi vs. Rumsfeld, Justice O’Connor weaves together stories from the Court that have helped define our nation’s progress.

Justice O’Connor paints vivid pictures of Justices in history. We get a rare glimpse into the Court’s inner workings: how cases are chosen for hearing; the personal relationships among the Justices; and the traditions that bind one generation of jurists to the next—from the seating arrangements at Court lunches to the competitive basketball games played in the Court Building’s top-floor gymnasium.